Close encounters of the bovine kind

Yesterday I took Otis on a hike in Las Trampas Regional Wilderness area in the East Bay, in part to expand the section of my website dedicated to off-leash dog hikes in the Bay Area.  It was perhaps our last warm, sunny day for a while and I wanted to take full advantage.  I had no idea that Otis was in for a new and (for her) scary experience in the form of…cows.

I am not quite sure why this open space is deemed a “wilderness” because, while it is unpopulated by humans, it’s not far from farms, stables and subdivisions, and once you’ve hiked up high enough you can see all these things.  The Las Trampas brochure says that it is one of the least-visited public open spaces in the region—I did not see a single person on our 5-mile hike—but the plethora of horse hoof prints and bike tire tracks indicated to me that this park gets plenty of use, probably on weekends. 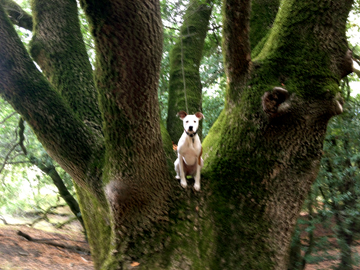 The beginning, lower elevations of our loop passed directly behind those stables, then up increasingly steep open fields interspersed with stunning groves of California Live Oaks.  We took advantage of low limbs on a massive old oak to work on Otis’s tree-climbing skills, and then proceeded towards the top of Rocky Ridge.  I was spacing out on the lovely views, with Otis was running a bit ahead of me, when I heard her loud warning barks.  I sped up to catch up with her, crested the top of the ridge and saw the object of her barking:  About 15 cows lazily grazing and gazing at my dog with no fear at all.

Now, Otis was by nature a fearful puppy.  We had implemented an intensive socialization program to quell her unfounded fears by exposing her to as much varied stimuli as possible, and while that included horses, until yesterday she had never experienced cows up-close and personal.  To us humans it might seem that a dog would correlate cows and horses since both are roughly the same size and shape.  But because dogs experience the world first and foremost through the sense of smell, and horses smell different than cows, to Otis these creatures were completely novel, reason enough to fear and avoid them.  But I was going to have none of her bovinophobia:  It was time for some remedial cow-based socialization. 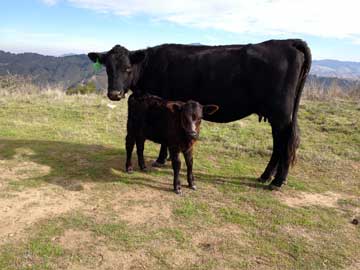 At first I tried to coax Otis thought the small herd, but she held her ground and refused to budge.  Then I walked about 20 yards past the cows and called her to me.  Again, no movement on the part of my dog.  So I walked back and leashed her up, then without saying a word, lead her through the herd.  She was wary and somewhat reactive, but I ignored that, then turned around and walked back through the herd, again saying nothing.  We repeated this about six times, on each pass moving closer and closer to a mother and her calf.  Who could be afraid of such a sweet-looking baby?  Those eyes!  Finally, she stopped reacting and walked calmly through the herd, and then we continued on our hike.

Towards to end of the hike, we once again encountered a small herd of cattle.  I said nothing to Otis as we approached them, allowing her to surmise the threat.  Obviously our short bovine socialization session an hour earlier had done the trick:  She trotted through the middle of the cows, curious and alert, but showing no fear at all.  Which brings me to the moral of this story:  When your dog encounters something scary (to them), the last thing you should do is coddle the fear (“oh you poor baby!”), or pick her up, or even talk to her.  Your best bet is to set about desensitizing your dog by showing no emotion, saying nothing, and by your actions demonstrating that the fear is unfounded.

Having owned well-trained dogs all my life, I started Better Nature Dog Training to exploit decades of experience teaching across a number of fields. I am nationally-certified through the highly-respected Certification Council for Professional Dog Trainers and am a professional member of the Association of Professional Dog Trainers. I teach people how to effectively train their dogs by clearly demonstrating that every interaction counts when training a dog to come when called, for example, or instructing a puppy how to best get along in life. I take a scientific and holistic approach to dog training. The scientific aspect comes from understanding dog psychology from an evolutionary perspective, knowing how dogs are both similar to and distinct from their ancestors, including the grey wolf. The holistic component derives from taking into account all facets of any particular dog’s situation, including upbringing, prior training, traumatic events and—most importantly—the characteristics of his home and family life. Training a puppy or dog can be a most rewarding life experience; it can also be stressful and perplexing. One of the best services I provide is taking the guesswork out while lending a sure, guiding hand in successful dog behavior development and modification.
View all posts by Jeff Stallings, CPDT-KA →
This entry was posted in Dog stories and information and tagged canine companion, dog, dog training. Bookmark the permalink.